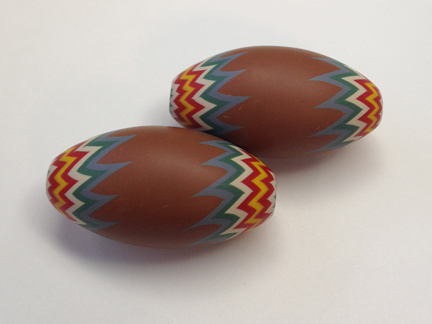 Having not made a B.O.U.S. before, I combined scrap with fresh color (pink) that I wasn't likely to use otherwise. That way, if I didn't care for the results it wouldn't be too tragic. Interesting, but not something I think I would do very often. I wore down two sander belts and still think it needs to be shortened up a bit. For some reason the pink is really bright in the photo - I honestly didn't color correct the image.

If you study the image closely you'll find hints of some of the challenges I have with this process. Occasionally, layers don't stick together well and the ends of the bead cane are less accurate than the center. Because all of the cane is included in this bead the ends are what show up in the grind making it difficult to create a very precise AND large bead. It's the reduction of the cane or snaking it out that makes the process more forgiving.

Last night I started two new patterns that break from some of my recent designs. Hoping to post some finished beads this week. 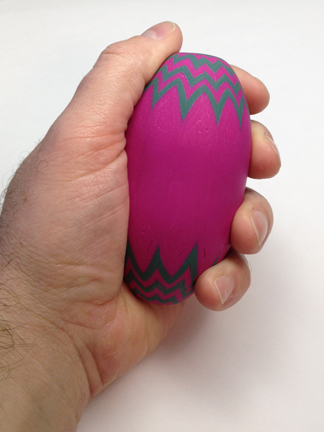 
Back in July of this year, I posted an image of some black and white beads. They are some of the most precise that I’ve ever made as well as some of the biggest. They are also the only chevron beads that I’ve built into a finished necklace.

The beads were made specifically for a music video project. I sent them to Africa with a member of the Mormon Tabernacle Choir which is an all-volunteer group comprised of 360 voices. They’re based in Salt Lake City, Utah, and produce the weekly radio program Music and The Spoken Word which is the longest continually-running radio broadcast in the United States.

The soloist in the video is recording artist Alex Boye, who is also a member of the Choir. Those in Europe may recognize him from his former gig in the boy band “Awesome.”

I think the video is awesome! I knew that Alex was traveling to Ghana and that my beads would be around his neck during filming, but I didn’t know they were on-location at Cape Coast Castle. I also didn’t know he would be singing a spiritual. Here is the video or you can go to the choir's new YouTube channel.

I think the result is haunting. Alex seems to me a ghost representative of every soul who passed through the castle bound for the western hemisphere. What a tragedy slavery is. It’s difficult to comprehend and impossible to make sense of.

I hope that people watching the video recognize that there is hope to be found even in the most difficult of personal circumstances. The video expresses the Christian view that hope comes through “walking” with Jesus Christ. I’ve found that to be true in my own life and being part of this project has been a unique opportunity to bring together my personal interests in beads with my personal faith – something common to people of many different faiths found around the world. If curious, you can read more about my personal beliefs at mormon.org.
7 comments:
Email ThisBlogThis!Share to TwitterShare to FacebookShare to Pinterest
Newer Posts Older Posts Home
Subscribe to: Posts (Atom)
Contact me by email

I am a polymer clay artist with an emphasis in making beads. I enjoy exploring the possibilities of geometric patterns and lines. By its nature, polymer clay lends itself to organic fluidity and sculptural forms. But through mechanical intervention I coax the clay to comply with my own mathematical rigidity.

Unpredictable chaos makes up much of my life. The clay allows me to create forms, symmetry and rhythm which are personally therapeutic and welcomingly familiar to my instincts.